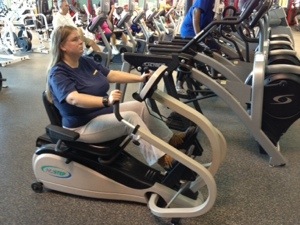 We’ve started a new year, and two new months, (January on the Gregorian calendar and Shevat on the Hebrew calendar), and one of the things I gave a lot of thought to during the end of last year was getting back on track. I’ve been working out pretty regularly, but I know that I want to add more of this to my schedule. Also, I’ve been a slacker when it comes to tracking my food. For a while, the Weight Watchers app was pretty much inaccessible, so tracking food became a task that got done in the Livestrong app, workouts were (and are) being timed and logged with RunKeeper, and I’m using my Basis band to track the number of steps I’ve taken, number of calories I’ve burned, and my sleep habbits, among other things. So for me, that one app change kind of screwed the whole thing up. But starting last week, I started tracking my food in Weight Watchers again, since they’ve made a lot of changes to the app and it’s now pretty much accessible.

As far as the Basis is concerned, I love it, but am still disappointed that there’s not a full API (Application Programming Interface for the ess technically-minded), that we can use to manipulate and analyze our own data. There is a JSON feed, from which we can sort of pull data though, and I plan to write a widget that will let me display how many steps I’ve taken and how many calories I’ve burned on my sidebar. It’s just going to take some time because I’m working on other work-related stuff, and so that becomes not a top priority.

One of the things I have on my getting-on-track list is to pay attention to my spiritual life. I’ve slacked on this too, and would like to get that back together, especially prayer. I’m OK with the one-off mitzvot, and those that are sort of one-off, (candle lighting, for instance, happens once a week), but daily prayers have always given me some trouble. I still haven’t figured out how to keep myself from letting that one go yet. But I plan to try to be more regular with that this year.

Now to the writing goal. I’ve started writing on a regular basis, and this year I want to start posting more of that long-form writing. My original goal was two hundred and fifty words per day, and I’ve managed to meet that one regularly, so I’ve upped the goal to five hundred words per day. I’ve started using the wordPress new Quick Draft feature to write down ideas and save them as draft posts, which will make posting on a regular basis a little easier since I’ll already have partially-formed ideas ready. I’ve also pued together some sources with writing prompts for when I get stuck.

I also want to start preparing to give more speeches for Toast Masters. I gave one speech already, and want to start doing more towards the various qualifications. Good thing I can pretty much speak on anything I want. I may also post some of those in modified form as posts, if they’re appropriate to this space.

Finally, I plan to play Beep Baseball again this year, and we’re working on getting our local team, (the Augusta Hammers), off the ground. I had a lot of fun doing that last year, it served as an extra work-out source, and I got to travel, which I love. I want to get a guide dog this year as well, and would hopefuly like to do that in June or so.

given all this, I ought to have a busy year. And it’ll be interesting to look back at this a year from now and see how much of this I’ve accomplished. I may post more on what I’m doing in order to reach my goals at a later point.

Now it’s your turn. What kind of goals do you have for this year? Go ahead and share them in the comments.

This site uses Akismet to reduce spam. Learn how your comment data is processed.