So about that Jewish community center in Georgia that received a bomb threat today. It wasn’t mine, it’s in Columbus and I’m in Augusta, which are at opposite ends of the state. But it’s a very tiny one, in a small town that has one or two institutions where all the Jews in the area congregate, blurring denominational lines in a lot of cases, because there aren’t enough Jews to support multiple communities. This Sunday is Purim, and I am considering attending prayers at my local Chabad House, because hearing the megillah is a mitzvah, (and I really should do more of those), community, celebrating with other Jews, ETC., and I now need to add whether or not the possibility of a bomb threat or similar is an acceptable risk to those considerations. Not that this is a new thing. It happens to Muslims, and to people who might look like they’re “Muslim”, and anybody else who is not straight, white, and an acceptable form of Christian. None of this is OK. I had very little empathy or simpathy for Trump supporters and Trump voters before this. I have zero now. You guys opened this door, and there isn’t a violin small enough for the Trump voters who are now whining because they’re being ostricized. I think ostricism is an incredibly small price to pay.

Still working on getting my #indieweb setup just the way I like it, and I’m thinking it may be time for some custom post types to handle various post kinds. It would be nice to have a menu item in my WordPress admin screen for things like notes, ETC.

Testing out a character limit plugin and finalizing my #indieweb setup for now.

Time for some Star Trek: Voyager and beer.

OK Thunderbird, time to get over yourself.

I have to say I’m rather enjoying the ability to use a #WordPress instance to create content and then post it directly to the social medias. #indieweb

Now all I need is a GUIless client to post and I’m golden.

Having a few beers, playing around with web technologies.

I wouldn’t call any of this painless to set up, but owning my content is so fucking worth it.

Definitely unimpressed with the third season of Voyager. Only two good episodes.

I’ve come to the conclusion that some people leave amusing easter eggs in their documentation as a special treat for those of us who RTFM.

Posting directly from Facebook this time because I need to change post audience for automatic posts to public and this appears to be the only way I can do it.

Oh FFS Instantbird it’s just a text chat there’s no reason for you to be unresponsive.

Probably time to just say to hell with it and keep a separate Firefox window open with all the Slack and IRC windows in their own tabs and use that Greasemonkey script by the NVDA guys floating around. I will, however, need to figure out how to get Firefox to allow me to log into the same service multiple times without saving the session cookie from the last login, thus keeping me logged in as the other account. Or buy a computer with sixteen GB of RAM and eight cores. This is something I’m going to do, but not just to handle Instantbird and its stupidity. 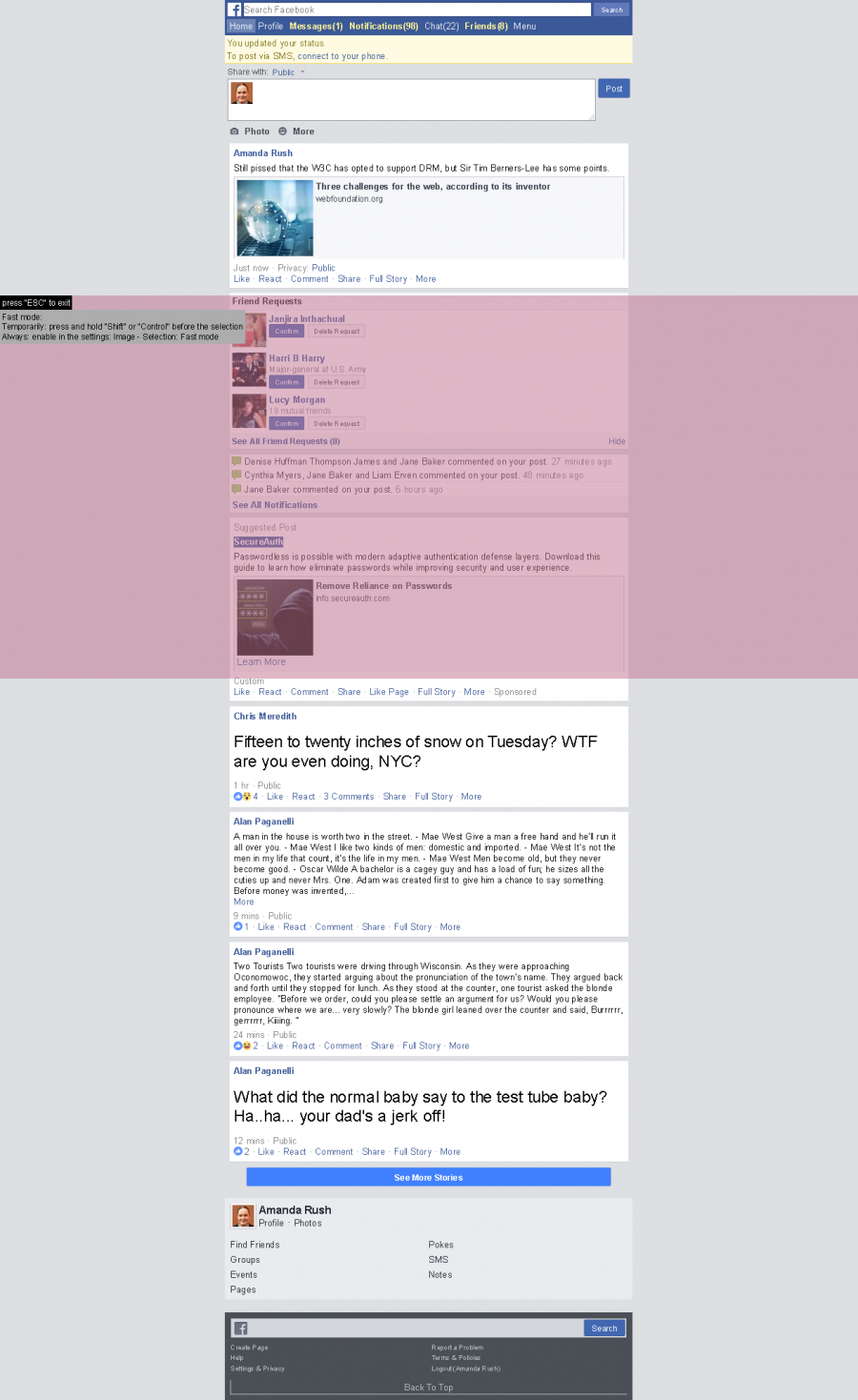 Well hi there, the Facebook! Thanks for noticing that I posted something about how your efforts to become the central authentication service for everything is not a good thing, and showing your appreciation by showing me an ad for, you guessed it, an ad for passwordless secure authentication. I’ve attached a screenshot for the light slaves, but for the blinks, the relevant text is this:

Yet another advantage to owning my own data: I can share the text of screenshots as text. 🙂

Apparently switching my default post kind back to article didn’t fix the webmentions issue. Back to the drawing board.

Having to use the full Facebook site to change app settings is a pain.